The Highest Risk Places in America For Your Car

And How To Avoid Becoming a Victim of Car Theft

It’s very import to not only drive safely but park safely! When your car is sitting around in parking lots or driveways, it’s good to use smart tactics to avoid having your stuff being broken into, from locking your doors to checking your alarms to hiding your valuables under your seat. If you’re living in one of these cities where car theft is common, you might want to take it a step further and purchase a lock for your steering wheel or perhaps even take your steering wheel with you!

With this graphic below, discover the cities where taking the proper safety precautions could help lower your risk substantially. A few simple steps could help save you from being the next victim of car theft. 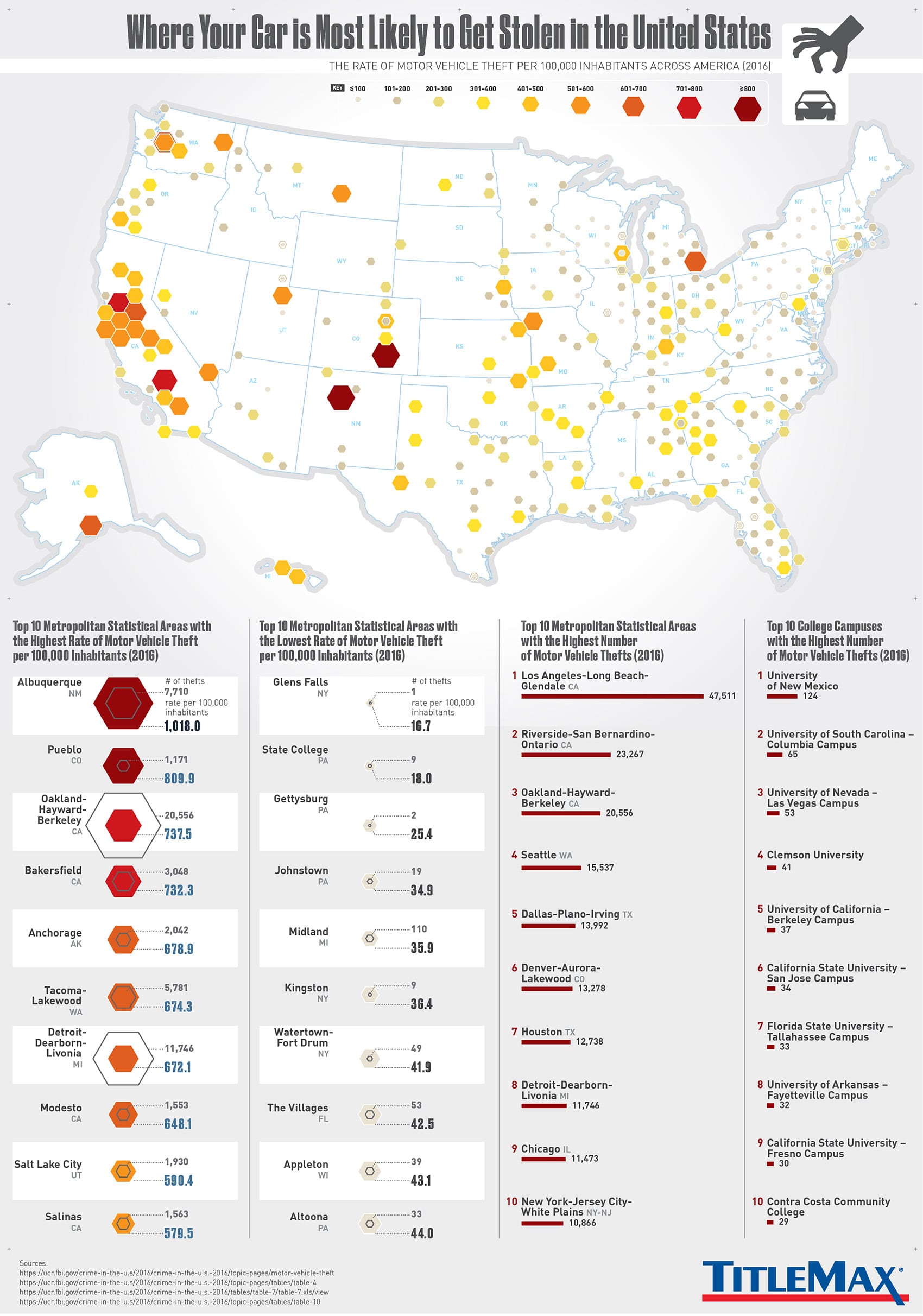 Motor vehicle theft and “carjacking,” which involves theft while you’re still in the car, are huge problems in some parts of the United States. There are typically more than 700,000 motor vehicle thefts every year in the U.S. Statistics on carjacking alone haven’t been studied in detail since the 1990s, unfortunately, but there are some easy tricks you can use to avoid these very dangerous situations.

For instance, police tell us that carjackers use several tactics, like the $20 trick, to get victims out of the car. If you see money on your windshield, don’t get out! Drive away with the money (which serves them right!) and retrieve it later, if you can. And at all times, stay aware of your surroundings. To help you with that, we compiled a list of the places with the highest rates of car theft in the U.S., according to FBI data.

Where is your car most likely to get stolen in the U.S.? We’ve created a heat map and organized car theft rates by city. With thousands of points of data for more than 300 U.S. metropolitan statistical areas, this graph dives deep into the rate of motor vehicle thefts per 100,000 residents, giving a fairer view than simply the number of thefts, which would skew toward more populated areas. Check out car theft statistics by city to see how your city compares!

What is the city with the most stolen cars in the USA?

Looking at just the numbers, the city with the most stolen cars in the USA is Los Angeles, CA. The greater Los Angeles-Long Beach-Glendale metropolitan area experienced 47,511 thefts in one year.

But if you compare this to the population and get a rate of car thefts per 100,000 residents, it’s Albuquerque, NM, which has the highest rate at 1,018, even though it only experienced 7,710 car thefts in all. Since it’s also home to the University of New Mexico, the college with the highest reported number of car theft rates in the United States, you could probably consider Albuquerque the car theft capital of the US! What’s happening there?!

What are the top cities for car theft in the US?

Purely by the number of incidents, here is a list of cities ranked for car theft. In USA municipalities, the number of thefts may be skewed by a large population, so also examine the rate when looking at car theft statistics by city.

It’s interesting to note that New York City, despite being the most populous city in the US, has low motor vehicle theft statistics and a rate of only 75.3, which is likely because so many of its residents don’t drive a car. Only a fraction of people get their car stolen there, while tiny Modesto, CA, the setting for the film American Graffiti, has an insane rate of 648.1.

What if you live in a city with a high car theft rate?

With our map of car theft rates by city, you can find stats on an area near where you call home. What if you live in an area that ranks highest in car theft? Cities like Pueblo, CO, and Oakland, CA, have extremely high rates, for instance, but by being alert and taking proper precautions, you can help lower your risk no matter where you live. Remember to be safe in those U.S. cities, but be safe in your hometown, too. Don’t leave your car on or your keys unattended, and always lock your doors.