Facts about food insecurity in America can be startling and difficult to face, but it’s important that we do. It’s both horrific and bewildering that child food insecurity and obesity would be so intrinsically mixed, that there’s such a lack of nutritious, healthy food for America’s youth for them to succeed in school and in life. Meanwhile, millions of dollars of food waste in the US is being produced every single year. 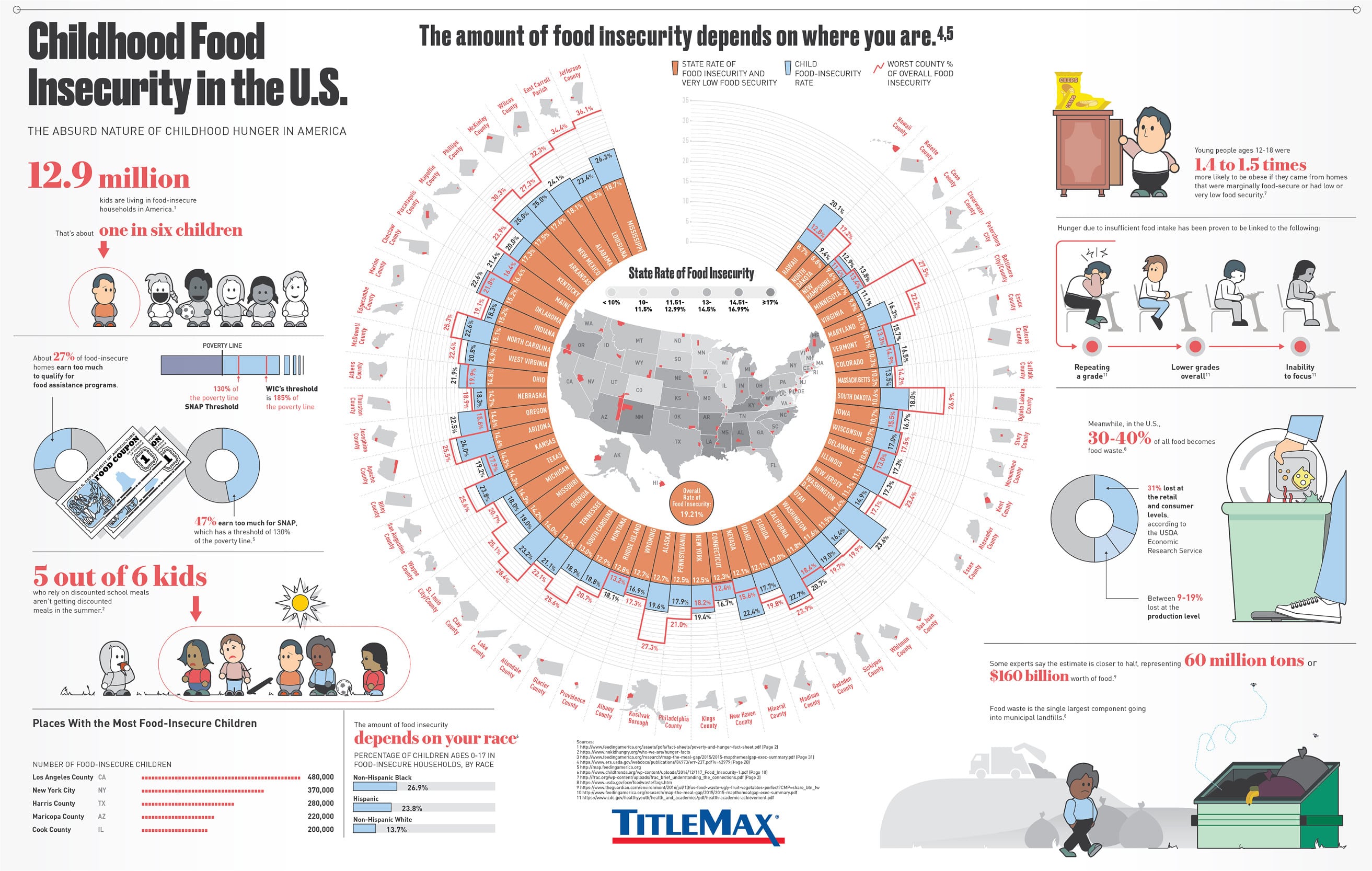 Do you want to add this graphic to your page? Copy this embed code:

What is food insecurity?

The US Department of Agriculture uses this food insecurity definition:

The USDA uses data to define food insecurity in two ways: low food security, meaning those who report no reduced food intake, but a reduced quality of diet, and very low food security, which is confirmed reports of disrupted eating patterns or reduced diet. This is studied by observing a lack of financial resources for food in a household.

How many people are food insecure in the US?

Here are some sobering facts about food-insecure families in the United States:

If you take a closer look at US food insecurity statistics at a state- and local-level, you will notice some uncomfortable trends as well:

Race factors into food insecurity, too. Black, non-Hispanic houses (9.7%) suffer from very low food security more than the national average (4.9%) as do Hispanic houses (5.8%). The percentage of children in food in-secure houses is higher for black children (26.9%) and Hispanic children (23.8%) than white children (13.7%).

What is child hunger in the US really like?

But to fully understand the situation experienced by America’s kids goes beyond both child hunger facts and sad faces on billboards.

In sum, there’s a huge gap between federal programs and child hunger rates in America.

What is the horrible truth about food waste in America?

Food waste statistics estimate that we throw out somewhere between 30% and  50% of all the food we produce. Sometimes this is at the producer level, but often it’s at the consumer level. One possible reason is the ever-increasing portions of restaurant foods; it’s estimated that today’s average restaurant meal is four times larger than its 1950s counterpart, and it’s up to eight times larger than USDA standard serving sizes. It can also have to do with bad or over-cautious food date labels and consumer waste that results from “ugly produce.”

What are the possible solutions to food insecurity?

Childhood hunger is an absurd thing to have in the midst of so many potential food waste solutions, whether it’s re-using food waste as new food products, proposing a tariff on restaurants, companies, and farms for waste, having rigorous food waste education programs in schools, or raising the ceiling for SNAP applications. Knowing how to stop child hunger in America requires both massive public concern and ingenuity. Let’s all do our part to reduce waste and feed the hungry in Am

Planes, Trains and Automobiles
Transportation has shaped our society across the broadest possible spectrum from both practical purposes, as a tool for survival, to aesthetics, as a personal expression and style and a millennium worth of history and science from the Orient Express offering transportation in 1883 to the Japanese Bullet train today that travels 200 MPH, vehicles are critical to our existance and at the same time sensationalized in film, as depicted in James Bond films and unusual video game vehicles. Few things we own have as much importance as the vehicles we own or dream to own one day .

Lifestyle
Discover what’s happening in the world in media, entertainment, daily news and trends and how they affect our daily lives and interests.Learn about a broad variety of topics that will inspire you and how you live, dress, shop, entertain, socialize and care for yourself each day.
Discovery Center
Close Menu
consequat. elementum justo ut accumsan dictum dapibus