Corporate Tax by Country Around the World

Amid big changes in the tax code and so many political discussions about the economy, many are interested in knowing what corporate tax rates around the world look like. We’ve found the data on corporate tax rates by country and compared it to nominal GDP to see if there’s any correlation between company taxation and the notion of economic success. Here is the best corporate tax rate comparison by country for those looking to get a quick idea of how different parts of the world stack up.

Would you like to embed this infographic on your site?

Corporate Tax vs GDP by Country 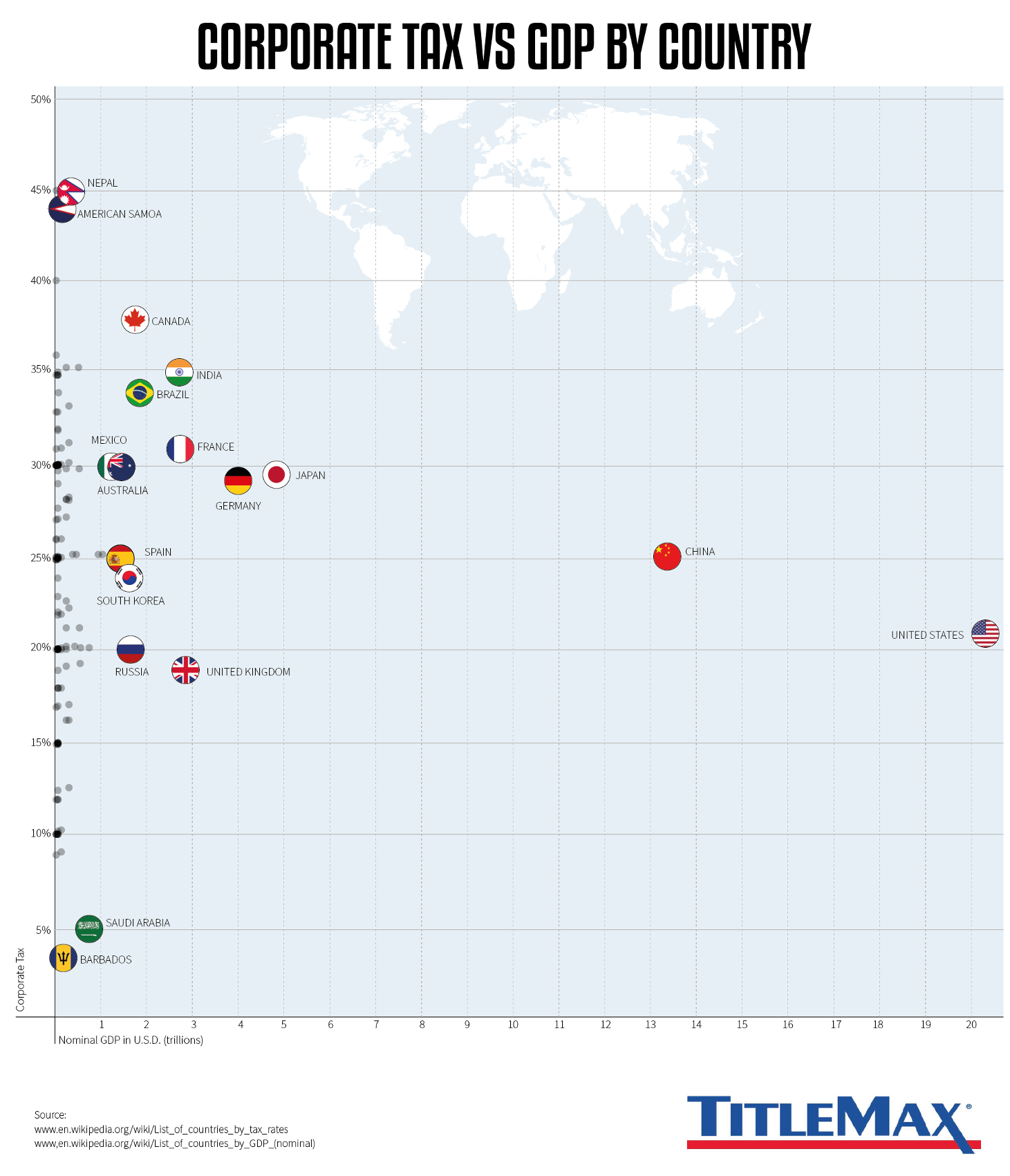 Would you like to embed this infographic on your site?

What Is Corporate Tax?

The corporate tax refers to a direct tax imposed on corporations or analogous organizations. It might apply to corporations doing business in that country, corporations with permanent establishments there, or corporations incorporated there.

This tax is important in discussions of economic viability, as many have argued that a lower rate would invite more businesses to the country and therefore boost the economy as a whole, though that claim has been contested and the effects so far have been mixed.

We’ve done a quick corporate tax comparison that examines the average corporate tax rate by country and how the United States fares on the world stage.

Do We Have the Highest Corporate Tax Rate in the World?

The U.S. corporate tax rate compared to other nations, like the UK (19%) or Canada (34%), is in the normal range. The rate certainly can go higher, as many major economic hubs, like Japan (29.74%) and even India (25-34.9%), have rates closer to 30%. But it could go lower, as other business-friendly countries have ridiculously low rates. For example, the Ireland corporate tax rate is only 12.5%, and the Saudi Arabian rate is a jaw-dropping 5%.

What Are the G20 Corporate Tax Rates?

Our infographic shows more international corporate tax rates compared against GDP; one can see that it is a somewhat dubious relationship.

What Is the Highest Corporate Tax Rate in the World?

As of now, the country with the highest tax rate is Nepal, which has a total possible corporate tax of about 45%. Next up for the world’s highest corporate tax rates is American Samoa, a territory of the United States, which has a tax range of 15-44%. Then, there’s Seychelles with 40% and our neighbor, Canada, with 38%.

Which Country Has the Lowest Corporate Tax Rate?

Anguilla, Bahamas, Bahrain, Bermuda, the Cayman Islands, Guernsey, the Isle of Man, Jersey, Kuwait, Saint Kitts and Nevis, the UAE, and the British Virgin Islands are all completely corporate-tax-free places, so logically, they have the lowest corporate tax rates. Because they have the lowest taxes in the world for corporations, these places are often favorites of conspiracy theorists and the wealthy alike. The Cayman Islands, for instance, is considered a tax haven.

Taking care of a home and family is a blessing that comes with many responsibilities including, and most importantly showing love, care and support. It can be overwhelming at times, but finding balance through efficient solutions can help. Discover with TitleMax, “Home and Family” series aims to help provide great tips for your home and family to make each day a little easier.