What the Most Profitable Companies Make Per Second

Have you ever wondered who makes the most money in the world? We’ve created a list of the world’s most valuable companies by profit and stacked them by how much money they make — not yearly or quarterly or even weekly, but by the second. Find out what the top 25 wealthiest companies make with every tick of the clock here.

At least we can answer the question of “How much do companies make per second?” But we may not like what we find out.

Here is a breakdown of the top 25 most profitable companies by how much they make per second: 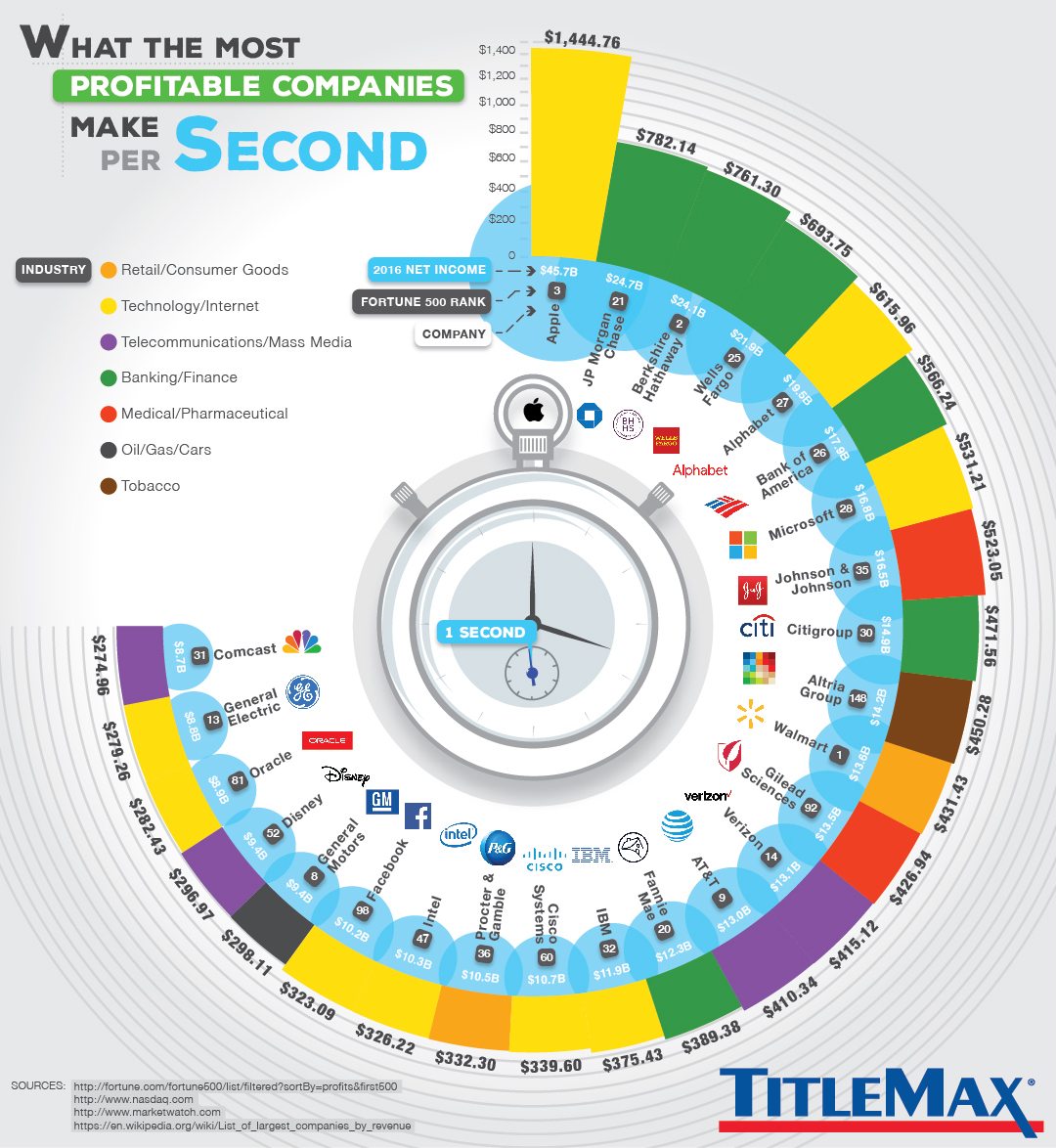 How much money does Google make a second?

What is the richest company in the world?

According to their 2016 net income, Apple takes the prize by far. They made $45 billion in net income last year, with their gross profit at $84 billion. But considering holdings and other factors, the Apple net worth is uncomfortably close to a trillion, at $756 billion currently. Those numbers are almost beyond imagining, so to answer the question of “how much does Apple make?” consider this frame of reference: The median weekly earnings of an American worker are about $859. That’s roughly $586 less than what Apple makes … per second! How much is Apple worth today? Divide that $45 billion by 365 days, and you get roughly $125,000,000 per day; meanwhile, the median household income for a year is $59,039.

Google’s parent company, Alphabet, makes $615.96 per second. But how much money does Google have? Alphabet’s net income was $19.5 billion, but don’t let those smaller numbers fool you. Some estimate that they’re growing at about 17 to 20 percent per year, and the Google net worth is more than Apple’s. If one only questions “how much does Google make?” the answer places them fifth on our list; however if they decided to go against their own motto and “be evil,” charging more and more people for their services, the money they could make is astounding. How much is Google worth? The simple answer is a lot more than we think — it’s like a strange sleeper cell in the American market.

What are some of the other most profitable companies in the world?

One would assume that the other largest companies by profit would be either in banking and tech, which is mostly true; JP Morgan Chase, Berkshire Hathaway, Wells Fargo, Bank of America, and Microsoft are all packed into the top seven most successful businesses. But some of the other biggest companies in the world are ones with a pretty bad rapport with the public. Big pharma companies like Johnson & Johnson and Gilead Sciences make more than $400 per second, and Altria Group, historically Phillip Morris Companies Inc., profits from tobacco use at about $450 per second.

What do the biggest companies in the world have in common?

MBAs and hardened statisticians have been studying the Fortune 500 for commonalities for decades. The world’s wealthiest companies are typically all over the map, though. They’re young, old, agile, slow, established, online, admired, and hated. At a cursory glance, the most profitable companies in the world don’t have much in common besides the profits themselves.