Right now, the U.S. unemployment rate is about four percent, and it’s been sinking ever since the economic crisis of 2009 (when it was closer to reaching ten percent). We’re doing fine. But national statistics only show a wide picture of the whole; if we zoom in and look closer at communities and cities across the USA, we can see how unemployment jumps and sinks depending on which city, county, and state you live in. We’ve done exactly that by breaking down unemployment by ZIP code, and in the ten ZIP code areas with the highest percentage of unemployed people, those percentages go far above four percent! 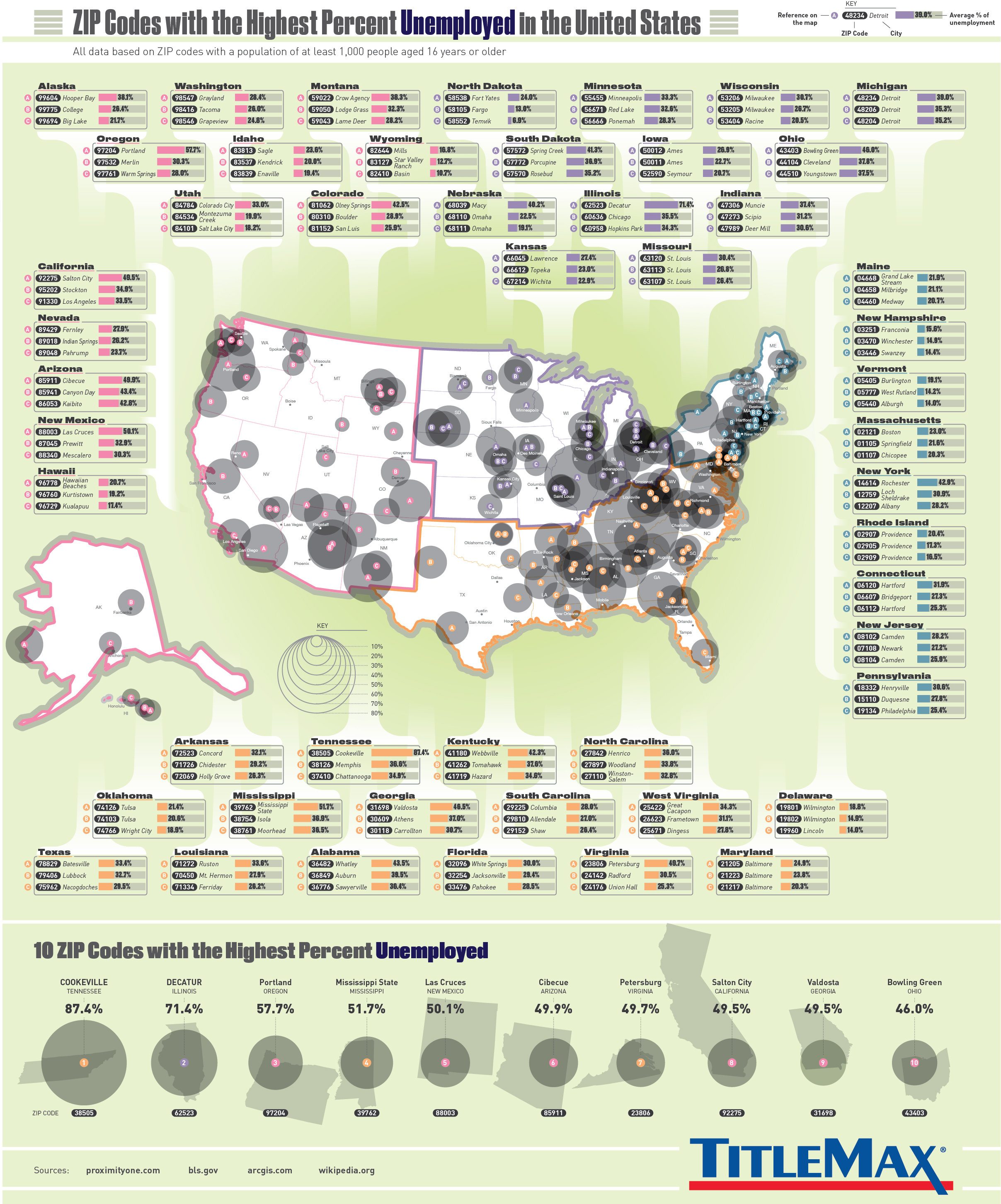 
Which state has the highest unemployment rate in the U.S.?

Before looking into unemployment data by ZIP code, let’s consider everything on a state level. The state with the highest unemployment rate is usually Alaska. Among the other most unemployed states and territories are typically the District of Columbia, New Mexico, and West Virginia. All in all, state rates usually still stay far below seven percent. But we’re still looking at too large of a picture when glancing at states with the most unemployment. For instance, within Alaska, the most unemployed state, the city of Juneau is doing pretty well, at a rate that’s around five percent, but counties like Denali have double-digit numbers. Denali’s jobless rate is 20.2 percent!

Among American metropolitan areas, the most unemployed city is El Centro, California, at 20.9 percent, followed by Yuma, Arizona, at 18 percent. Many southern Californian metro areas top the list. This data is only for census-designated metropolitan areas, though, and cities are often doing better than rural areas regarding employment figures. We’ve seen again and again how reporters, economists, and scientists have claimed that rural America is shrinking in population, struggling to keep up with economic demands, and suffering from the contemptuous relationship with energy-hogging cities. Only counting the metro areas when looking at the United States unemployment rate limits our view, too, so that we don’t have to look deeply at the communities currently struggling the most.

Which ZIP code truly has the worst unemployment rate in the U.S.?

Unfortunately, reliable data isn’t usually collected that way on a local level. The statistics are organized by ZIP code not by unemployment rate but by percent not employed. That’s a subtle difference that can mean hugely different numbers. Unemployment rate by ZIP code data is simply unavailable, but we can make our best guess.

What’s the difference between the unemployment rate and percent not employed?

The percent not employed is the total amount of non-working people over the age of 16 in an area. The unemployment rate looks very closely at the labor force, as defined by the Bureau of Labor Statistics. It discounts people who are retired, in the armed forces, in prison, in school, and a mysterious sum of people called “discouraged workers,” those who have looked for a job in the past 12 months but have not searched actively in the four weeks before the survey was taken (meaning that they may have given up looking). So the unemployment rate by ZIP code can sometimes show only a fraction of the total percent unemployed.

Which ZIP code has the highest percent unemployed in the U.S.?

Once we look at the local level, we see statistics that are truly staggering: In Cookeville, Tennessee, ZIP code 38505, the unemployed percentage is a whopping 87.4. Although the city of Cookeville itself and the rest of Tennessee are both doing very well, this paints a very different picture for one tiny community. Within cities like Portland, Oregon, small communities can be full of unemployed people, and in some rural areas on our list, almost half of the citizens aren’t working. Sometimes that is due to the college or prison population, but still, it gives a deeper picture of what’s going on in different parts of America.

Is moving the only option for those in high-unemployment communities?

It depends. There is not always overlap between the unemployment rates and the communities with the lowest income per capita. Sometimes, there are plenty of jobs a county or ZIP code away. Those living in Portland or even Cookeville might not have to worry, as both of these cities are always working at pulling in more jobs.

However, it’s important to stay mobile in times of crisis. Remember: Unemployment in the United States as a whole hasn’t touched the numbers seen in the Great Depression since. Often, we can still find jobs; we might just have to commute longer to do it.