50 Years of License Plates in the 50 States [Infographic]

Our colorful system of hundreds of different license plates.

In the U.S. we have a ridiculously colorful system of hundreds of different license plates. Let’s delve into how this monstrosity happened.

Why were license plates invented, and why did we start using them?

One might imagine that the implementation of the license plate was due to excessive traffic accidents or the need to hunt down criminals and that early drivers were annoyed and resistant, especially since many of the first plates had to be provided by the owner of the vehicle. 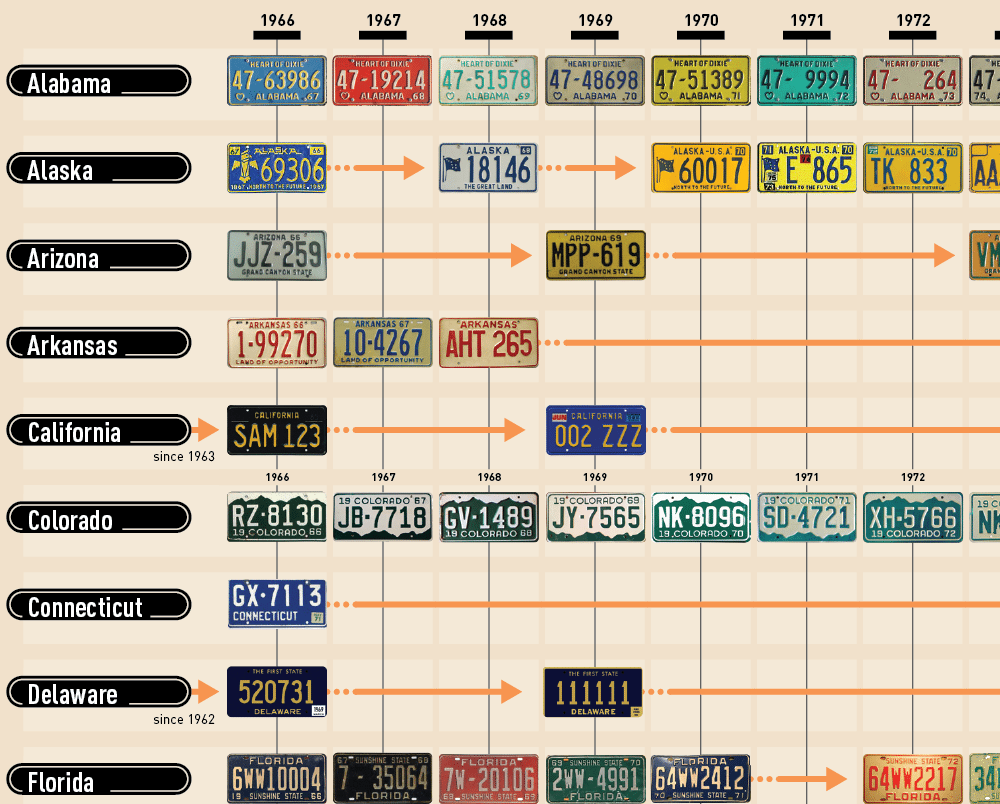 But alas, no: In reality, it had to do with pettiness, the fear of technology, and resistance to change.

Back in those days, automobile drivers were treated as second class to horse riders, and townships had local regulations banning these “unnatural” contraptions from their roads. The signing of the Doughty Automobile Bill in 1901 in New York was received with “rejoicing” by the Automobile Club of America at the time, which advocated for the bill because it finally provided regulations for vehicles and gave them equal rights compared to non-mechanical drivers: They could drive on any highway with a speed limit of 15 miles an hour, and they were very happy. (That seems quaint now, doesn’t it?)

The drivers simply were required to paint their initials on their vehicle to identify it. Obviously, this system began to fail quickly, as many people have the same initials, so it was later replaced by the state numbering system that started in 1903 in New York state.

Meanwhile, drivers’ licenses weren’t required until the 1930s, and many of them didn’t even require a driving test at first.

Licenses in general (like marriage licenses and drivers’ licenses), are not usually given on a national scale. The U.S government only offers license plates and assigns numbers to ambassadors, foreign diplomats, and federal vehicles (such as U.S. Postal Service vehicles). If the federal government did start consolidating the tax dollars and resources to give out plates nationally at this point, it would likely result in a huge, expensive, less-effective system. The reality we have now is that all 50 states, the territories, the District of Columbia, as well as some Native American tribes, use a colorful patchwork of plates, each with their own numbering systems. And that doesn’t even include the practice of vanity plates, which can feature sports teams or local landmarks.

Why are license plates different colors/themes?

In the Depression era, the simplistic, elegant designs of early license plates started to double as free advertising for the state in question to encourage visitors and promote state pride. Modern-day license plates don’t simply have colors and numbers but also often attempt to be representative of the state in question. Georgia, for instance, has the Georgia peach on its plates. Colorado has the Rocky Mountains. Some state designs, like Vermont, remain markedly simplistic. (Others, like New Jersey’s plates, seem to be designed only to strike fear into the hearts of those who see them…)

Why and when do license plates change?

Since each state has its own rules, each state’s authorities have their own frequency of re-issuing plates and reasons for doing so. License plates were once re-issued every year, but now many states do so every five, seven, or ten years. Some states, like California, allow for “legacy” plates for historical purposes and nostalgia. Other states, like New York, phase old plates out slowly, over the span of several years, in which multiple designs of plates are acceptable.

Since materials are now more weather-resistant, the practice of re-issuing plates is far less frequent.

At least we — the wacky automobile drivers — don’t have to paint our initials on our cars ourselves anymore.