How Americans Get To Work [Infographic]

How far do you travel each day?

How do Americans get to work every day? Do they ride rather than drive to work? And who uses public transportation in the U.S.? We’ve found some interesting facts and stats about our commutes.

According to the U.S. Census Bureau, the average commute time to work is 25.4 minutes. This infographic explores the means of transportation that Americans use to reach work, providing metrics on age, earnings, occupation, and industry. The “total” pie chart in each section is a breakdown of the demographics of the survey participants, so it serves a control group. The following pie charts show the percentage of the participants that fit into each category. If the number is higher or lower than the “total” pie chart, it indicates if that demographic leans towards any particular means of transportation.

Carpooling and public transportation stats are abysmally low in the U.S.

It’s important not to get misled by this graph: While the circles are of similar sizes, this is disproportionate. About 75% of U.S. workers drive alone to work, and 5% use public transportation. While it’s true that the industry is growing, with more than 400,000 employees and the highest annual ridership in 58 years reached in 2014, it’s clear that public transportation struggles to attract just that: the public. 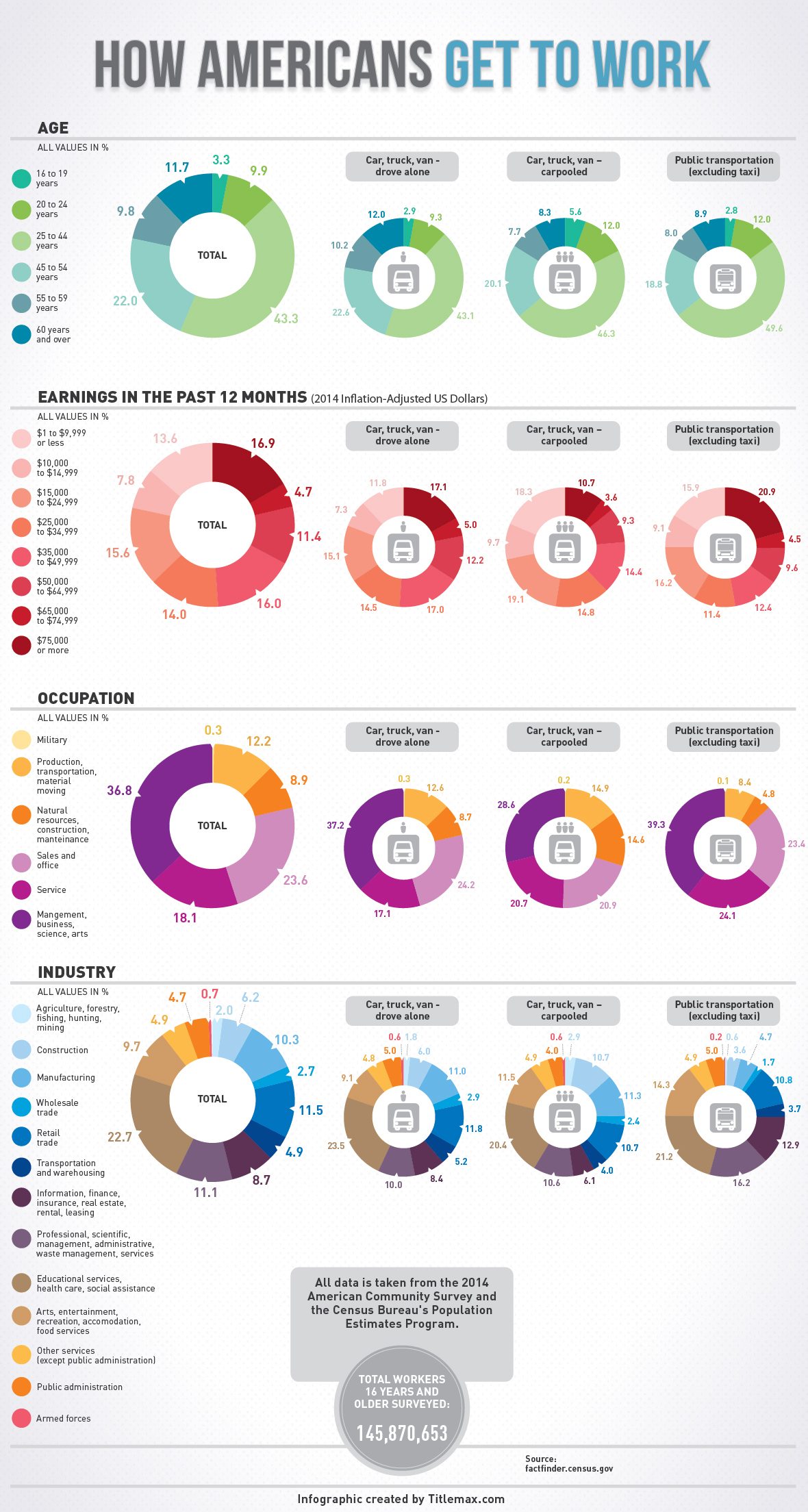 So who uses public transportation the most, and who in the workforce population is more likely to make their commute environmentally friendly?

A survey of 145 million workers 16 years or older tells about how U.S. professionals commute (according to the 2014 American Community Survey and the Census Bureau’s Population Estimates Program). Specifically, it tells us which parts of the population use alternative ways to get to work besides driving to work and back alone. Here are some interesting public transportation facts and key takeaways.

Are millennials really as earth-conscious as they say?

They’re not hypocrites. While the 20-to-24-year-old age group only represents 9.9% of the workforce population, they represent 12% of the total population that rides public transportation. Also, 12% of them carpool.

Older Americans would much rather drive alone, thank you very much.

Compare that to other age groups: Younger baby-boomers (ages 45 to 54) represent 22% of the population but only 18.8% of public-transportation-riders. They’d rather carpool (20.1%) or drive by themselves (22.6%). The trends are similar for older baby-boomers (55-59 years), though this group would rather take public transportation (8%) than carpool (7.7%). Those 60 and older are the same as the latter bunch.

The biggest slice of the workforce pie is between 25 and 44 years old, and a disproportionately high percentage of that group uses public transportation, making up almost half of all the people who do so: 49.6 percent.

Managers love public transportation, but they don’t like to carpool. (We wonder why.)

More than a third of those who ride public transportation are in business, management, sciences, or the arts.

Both the very wealthy and very poor use public transportation.

Only 16.9% of the population earns $75,000 or more yearly, but this group is disproportionately taking public transportation: 20.9% of them do. This means that about 1 in 5 of all public transportation riders are really rich. Likely, this is due to numbers from major cities like New York City.

On the other hand, carpooling and wealth seem to be more directly related. More than half of carpoolers are poor. About 61.9% of carpoolers make less than $35,000 per year.

About a quarter of U.S. carpoolers are in construction, manufacturing, or the agriculture and forestry industries, even though they only make up 18.5% of the population.

Who else is likely to commute in the U.S.?

Note that this data doesn’t include students or non-workers, who often are more likely to commute without a car than their employed counterparts. Though the data is older, likely more than half of students are transported at public expense. And in most U.S. cities, those who are living in poverty, disproportionately use an alternative commute method.

Are these numbers likely to change?

There are clear cons to having the vast majority of the American workforce drive alone: Commute times are longer, fatalities are often more likely, and workers spend an estimated $9,656 more per year on their commute.

These stats are likely to change, though: As demonstrated, the younger generation is more likely to not drive alone. Certain industries seem to be more public-transportation or carpooling-oriented, and hopefully, those will be on an uptick in the next decades.

The answer entirely depends on Americans’ desire to push for more and better infrastructure.