Odds and Chances of Death by Activity and Behavior

If you’re a cautious or worried person, you’ve probably asked yourself, “How likely am I to die doing this?” We don’t have the answer, but we do have some interesting odds and death risk rankings backed by micromort statistics to show how likely you are to die from certain activities, like jumping out of a plane to simply being born or getting out of bed! It’s amazing how our perceived fears have nothing to do with our actual risks of death. 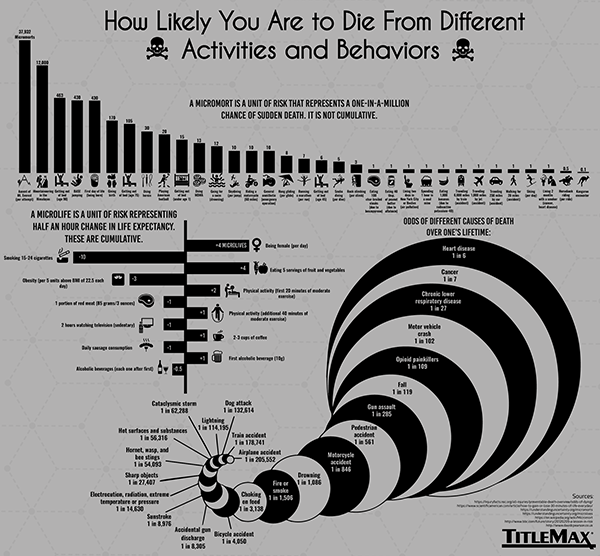 A micromort represents your risk of a one-in-a-million chance of sudden death. In our odds of dying chart, we’ve mapped unusual activities by their micromorts. The higher the number, the greater the risk. These might be some odd ways to die, like climbing Mount Everest, that don’t affect the whole population, but if you do them, you have a very slim chance of dying. Then, there are lifetime odds of dying, which shows your overall chance of dying from pretty typical deaths. So, you have a one in a million chance of sudden death from skiing for a day, but you have a one-in-six chance of dying from heart disease in America during your lifetime. Here are some facts to keep in mind:

But let’s not focus on dying as much; let’s focus on living. What can increase your life expectancy? A microlife is anything that changes your overall life expectancy by a half hour. Here are some tips on how to live longer from data:

How are you most likely to die?

When you’re asking the question, “How will I die?” there’s no real way to know, and data like this can only reflect the possibilities and likelihood of death based on others’ deaths. If you’re using these odds of dying as predictions, know that they should not block you from enjoying activities and behaviors you enjoy. For instance, one activity that’s very risky is getting out of bed in the morning when you’re 90! Does that mean a 90-year-old person shouldn’t get out of bed? On the other hand, it’s a fairly good idea to generally avoid heroin and opioid painkillers. The latter causes one in 109 deaths in the United States.

We’ve arranged these death statistics by cause partially to show that the chances of dying and our ruminating fears often aren’t related! So, regardless of our death chart, if you want to go hiking in the Himalayas, do!

The key to maintaining financial health is not only in the planning and managing of one's personal assets but in understanding the basics and evolution of the economy. The economy affects every part of our lives, yet many school districts do not offer economics and graduating without it is possible. In our households, money is rarely discussed, except for the idea of running out of it. Let's all start taking a proactive approach to becoming well-rounded in economics and finance, in order to make better everyday decisions for ourselves, and generations to come.