Being successful financially does not always correlate with academic background — brilliantly successful visionaries like Steve Jobs, Bill Gates, and Mark Zuckerberg found success without a college degree, let alone one from a prestigious university. However, when analyzing the data of alumni who became billionaires and millionaires, it’s clear that those who attend Ivy League schools such as Harvard and Stanford have an clear advantage. 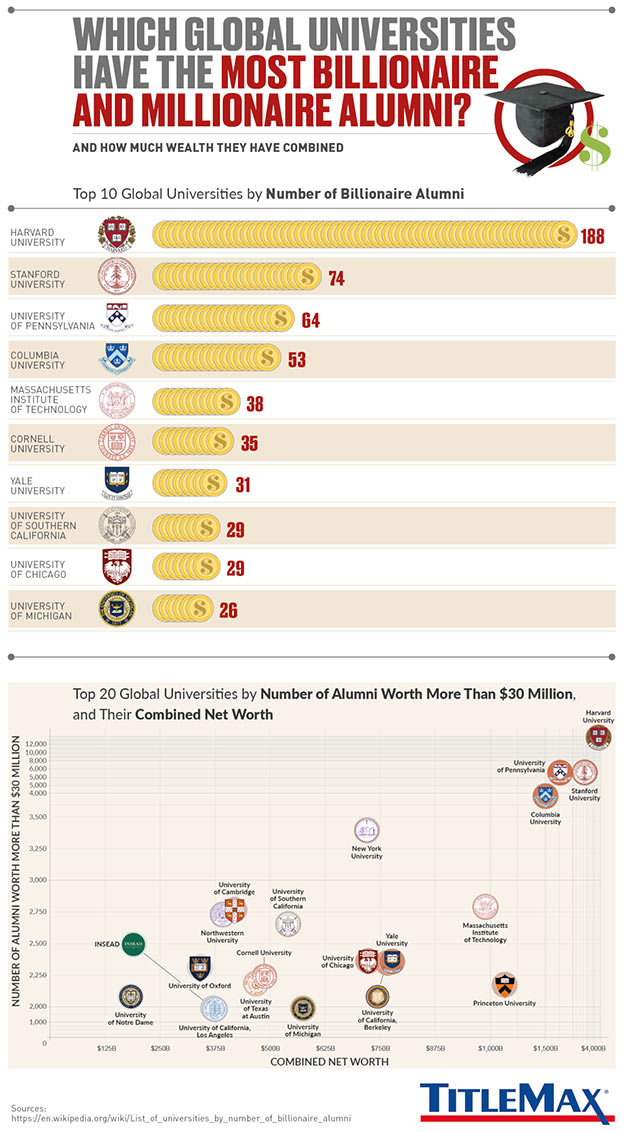 What University Has the Most Billionaire Alumni?

Who Are Some Famous Stanford Alumni Who Became Billionaires?

Stanford University in Stanford, California, has produced the second-most billionaire alumni, at 74. Famous Stanford attendees include Google founders Sergey Brin and Larry Page, actress Reese Witherspoon, and golf legend Tiger Woods. Business magnate and industrial designer Elon Musk was accepted into a Ph.D. program for energy physics/materials science at Stanford in 1995 but ended up dropping out after two days in order to capitalize on the Internet boom and launch his first startup.

What Are Some University of Pennsylvania Notable Alumni?

What Are Some Famous MIT Alumni?

The Massachusetts Institute of Technology has produced the fourth-most billionaire alumni, at 38. Famous MIT alumni include Buzz Aldrin, the second man to walk on the moon. He earned a doctorate in astronautics in 1963. In 1973, Shirley Ann Jackson became the first African-American woman to earn a doctorate from MIT. She became the chairman of the U.S. Nuclear Regulatory Commission during the Clinton presidency and now serves as president of the prestigious Rensselaer Polytechnic Institute.

What Are Some Famous Yale Alumni?

Yale University in New Haven, Connecticut, has produced the fifth-most billionaire alumni, at 31. Notable Yale alumni include the 41st president of the United States, George H.W. Bush, and the 43rd president of the United States, George W. Bush. Legendary actress and recipient of the Presidential Medal of Freedom Meryl Streep earned a Master of Fine Arts from the Yale School of Drama in 1975.

Which Universities Have the Richest Graduates?

Home and Family
Taking care of a home and family is a blessing that comes with many responsibilities including, and most importantly showing love, care and support. It can be overwhelming at times, but finding balance through efficient solutions can help. Discover with Title Pro, “Home and Family” series aims to help provide great tips for your home and family to make each day a little easier.

The Ultimate Road Trip
Take time to get out of dodge. Can be a plane, train or automobile. This series focuses on good old road trips. Some are a couple miles down the road and some are across the country or across the ocean to the most fantastic scenery or landmarks you've ever seen. Included are how to prepare, fun on the road, and preparation along the way.
Discovery Center
Close Menu
porta. libero accumsan mattis Phasellus et, risus. amet, leo