Distribution of Household Income in America, Visualized as 100 Homes

It’s time to paint a picture of the wealth distribution in America. Just how many people are below the poverty line, and how many people own the majority of the wealth in the U.S.? We’ve all heard vehement claims from both reputable sources and hysterical protest signs about income and wealth inequality statistics. We’ve heard tales of the richest 1% of Earth’s population owning almost half of the world’s wealth. We’ve heard legends of the dying middle class. We hear about class warfare spoken of as both a metaphor and an actual likelihood. But what is true, and how can we visualize and understand it?

What is the wealth distribution in the U.S. really like? 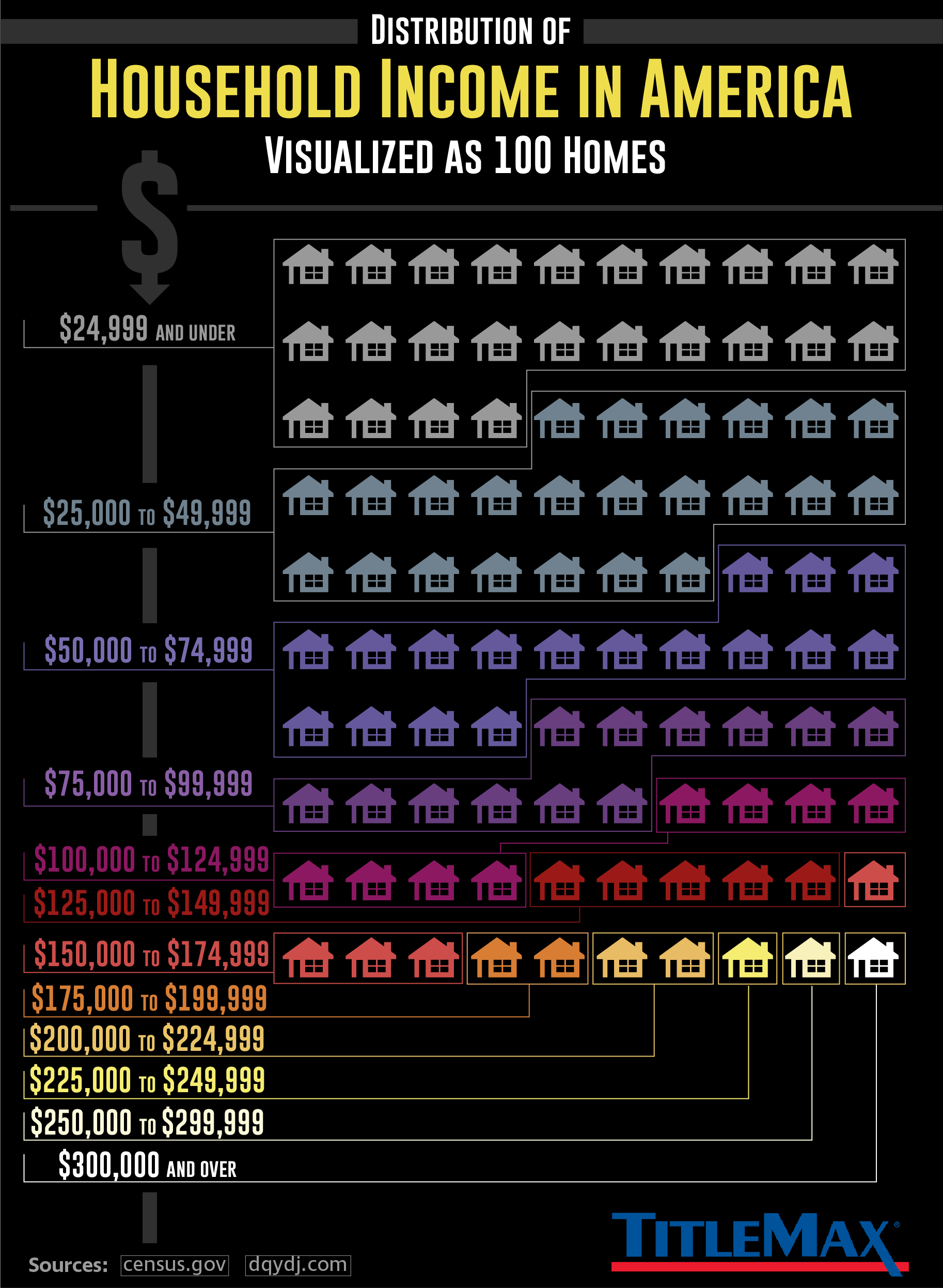 The truth is that if you ask the question, “How rich is America?” the answer is totally different than if you asked, “How rich are Americans?” An uneven distribution of wealth in the U.S. has led the country to be both the wealthiest and the most unequal of all advanced economies. Our Gini coefficient is the highest in the world. (For those of us who are not economists, that’s actually a really bad thing.) The Gini ratio studies the inequality of dispersion of wealth to a nation’s residents, and we’re the highest.

We’ve visualized U.S. wealth distribution based on 100 homes to show in simple terms the shape of the modern class structure. Using this model, 47 homes would make less than $50,000 per year in household income, and only one home would make over $300,000. That one home represents all of the fancy “cribs” of Hollywood and mansions of the elite, whereas 24 homes would represent the vast neighborhoods of people who make under $25,000. That salary is often under the poverty line for a family of four. That really shows off the unequal distribution of wealth in America. Meanwhile, the big earners are a tiny fraction, and the wealth gap in America has only been increasing over the years.

While simply glancing at the wealth inequality in America, it’s also important to remember that the economy is a living, shifting thing. One might argue that this is the basic shape that the U.S. economy has always had: a small upper class, huge middle class, and small lower class. However, the facts show that the middle class is both shrinking and earning less. The middle class is earning less in mean family income than it did 20 years ago, despite the fact that the economy (and GDP) is doing much better. Regarding holdings of family wealth, the top 10 percent have continuously earned more and more since the 1990s. Meanwhile, the percent of the middle-class population is shrinking in most places.

There’s a group who’s really unhappy and concerned about these changes to the middle class: millionaires! If the U.S. income distribution has such a severe wealth gap, it’s indicative of a lot of deep-seated economic issues, and employees without their needs being met are simply not as effective or productive as ones who are. That’s why so many millionaires want a higher minimum wage; they insist that $7.25 is far too low for their employees and that if more Americans had more spending dollars, more of them would buy more products. They want to give money to the people who would spend it rather than saving it. This, in fact, would earn many millionaires more as a whole. So ironically, quite a few people living in that single symbolic house at the top of the economy are preoccupied with how to feed and support the bottom 24 houses effectively.

This U.S. income distribution visualized as 100 houses can shed some light on our reality, others’ realities, as well as hot-button political issues, but it’s also important to remember how many recent changes there have been in the household income distribution. U.S. residents struggling, doing well, and getting by all have a slice of the pie, but that pie is constantly changing.