We took a look at the top 100 universities in the U.S. to give us a better picture of what tuition looks like in 2020. Out of those universities, we found the schools with the most expensive college tuition. Listing these national universities, including both private and public colleges, by tuition, we’ve found an incredible range that isn’t necessarily based on quality! See for yourself which are the most expensive colleges in the U.S., then decide whether there’s more bang for students’ bucks! 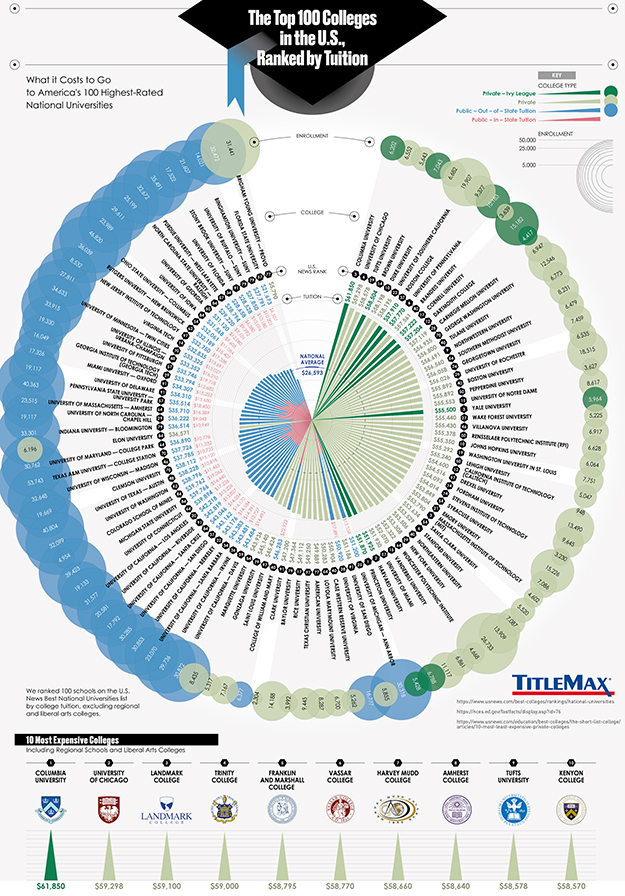 What Is the Most Expensive College in the U.S.?

What Is the Least Expensive Private School in the US?

The least expensive private college in the United States is Brigham Young University — Provo, with a 2020 tuition of only $5,790. It ranks as the least expensive among all private colleges, including national universities, regional universities, and liberal arts colleges. “People are motivated to come (to BYU) because we’re private and cheap,” said admissions counselor Kent Norris in an interview.

Ivy League colleges, which are renowned for being some of the most prestigious and expensive colleges in the world, have some pretty high tuition:

Princeton University, despite ranking as the No. 1 national university in the U.S., is $9,980 cheaper than Columbia University. It’s also the cheapest among the Ivy League schools.

The Top 10 Most Expensive Colleges in the U.S. out of the Top 100 National Universities

Out of the country’s highest-rated national universities, these are the cheapest colleges in the U.S. with the lowest tuition. Colleges like BYU are unique in that they’re both private and incredibly cheap, whereas most others on our list are state schools with both cheap out-of-state and in-state tuition.

Personal Finance
The key to enjoying personal financial health is by making the most of the money you have. It always helps to save a little more, spend a little less, and manage what you have today. Get to know tips and creative ways to live better on less. Learn how to get resourceful by recycling, and even how to make extra cash on what you don’t need. Financial fluctuation may be inevitable from time to time. How you handle and plan for it can make all the difference. Let's start planning today for a more enjoyable tomorrow and more empowered future.

First Time Home Buyer
The journey into home ownership can be a great adventure, but one with many steps and months of challenges to pursue before achieving this great milestone. First time home buyers may find the home buying process to be complex and intimidating from finding the right-forever home, to understanding financing, to maneuvering through contracts before getting to the closing table... One way to minimize the fear of the home buying process is to gain knowledge and guidance. The objective of this series is to help first time home buyers understand the steps and gain a good level of knowledge and confidence within the home buying process. An informed buyer is a confident buyer.
Discovery Center
Close Menu
ut neque. accumsan id consequat. non elit. venenatis adipiscing sem, libero. leo.