The world population is growing at a consistent rate of 1.05% every year. This increase may not seem like much, but when you consider that there are 7.7 billion people on this planet, this annual population increase of 77 million people turns out to be a lot. With so many people, city populations across the world will continue to grow. But which cities have the highest population density? We sought the answer to this question by comparing the population per square mile of cities around the world.

Explore our findings with this map that highlights the 25 cities with the highest population density.

You may be surprised to see which cities didn’t end up making the list, like New York City, which is known by many for having millions of people living on a very small amount of land. However, one of NYC’s neighboring cities, Guttenberg, New Jersey, did manage to squeak onto the list, landing in the 23rd spot for highest population density. Cities in Asia made up the majority of the list, especially in the Philippines, which has the three cities with the highest population densities.

Which city were you surprised to see had or hadn’t made this list of cities with the highest population density in the world? 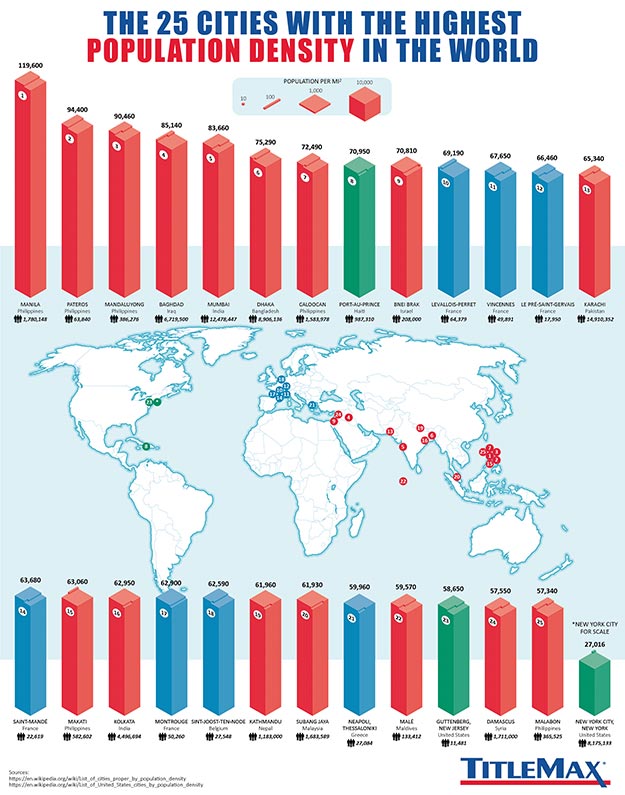 Which City Has the Highest Population Density in the World?

Asia had strong representation on the chart, with 16 of the cities with the highest population density located on this continent, followed by Europe, with seven cities making their way onto the list. How do these population densities compare to that of New York City, a location that many would consider to be a high-density city? You may be surprised to learn that New York City’s population per square mile is just 27,016, which is less than a quarter of the population density of Manila.

The 25 Cities With the Highest Population Density per Square Mile

Lifestyle
Discover what’s happening in the world in media, entertainment, daily news and trends and how they affect our daily lives and interests.Learn about a broad variety of topics that will inspire you and how you live, dress, shop, entertain, socialize and care for yourself each day.

First Time Home Buyer
The journey into home ownership can be a great adventure, but one with many steps and months of challenges to pursue before achieving this great milestone. First time home buyers may find the home buying process to be complex and intimidating from finding the right-forever home, to understanding financing, to maneuvering through contracts before getting to the closing table... One way to minimize the fear of the home buying process is to gain knowledge and guidance. The objective of this series is to help first time home buyers understand the steps and gain a good level of knowledge and confidence within the home buying process. An informed buyer is a confident buyer.
Discovery Center
Close Menu
dapibus Nullam vulputate, odio ultricies id, elementum Sed quis, pulvinar non