U.S. Cities With the Highest and Lowest Vehicle Ownership 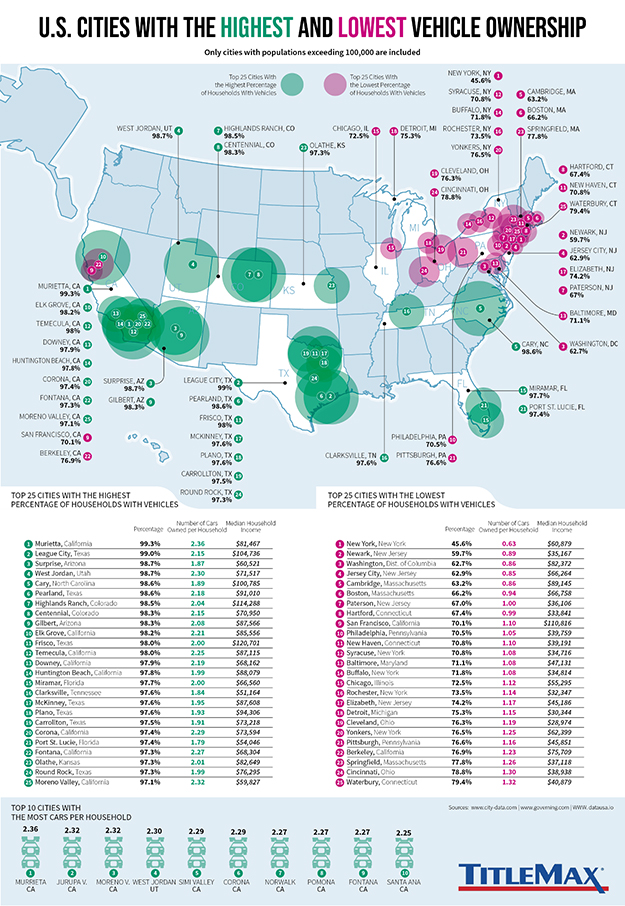 
It’s estimated that around 95% of American households own a car, and 85% of Americans commute to work by car. In fact, the United States ranks fifth for car ownership per capita in the world.

There’s much debate on the future of car ownership. Some theorize that automation will gradually eliminate the need for drivers, electric and hybrid vehicles will conquer the global market, and ride-sharing and renting services (like Uber and Lyft) will become the primary means of vehicle transportation. After all, cars are parked about 95% of the time. However, others disagree that car ownership will become antiquated. Public transportation has room for improvement in the United States, limiting options for commuting to work if you don’t own a car.

Here are some statistics that shed light on public transportation and car ownership in the United States:

Here are the top 10 U.S. cities with the highest percentages of households that own vehicles:

Here are the top 10 U.S. cities with the lowest percentages of households that own vehicles:

Most of these locations are large cities with public transport infrastructure. And Cambridge, Massachusetts, not only has easy access to public transit but is home to Harvard University; many college students do not own vehicles.

Here are the top 10 cities with the most cars per household:

The average median household income for these places is $69,359. California’s gas prices also soared over $4 a gallon in the summer of 2019, with some stations reaching $5. The national average for gas prices is $2.90, to put that staggering number into perspective. Only 5.3% of Californians commute to work by public transit, which is on par with the national average. Unfortunately, public transit ridership in California is declining.