Every Product Apple Has Made So Far

Check out the groundbreaking technology of the biggest electronics company in the U.S. with this comprehensive list of all Apple products! A timeline shows us just how much Apple has changed the core of the tech industry in only four decades, bringing the abstract concept of computing from college campuses to our pockets. What’s different now that our world is full of Apple products? History has been changed, plain and simple!

It’s been more than 42 years since “the two Steves” first created a hand-built computer designed for the American home, and since then, the company has created billions of different, creative, world-changing Apple products. History was made with each new innovation, whether it be the now-ubiquitous iPhone, the convenient idea of the personal computer, or the industry-creating tablet. We’ve created this innovative look back at all Apple products to list off each incredible marvel by year, from super-successful, like the company-saving iPod, to the duds like the Apple Bandai Pippin. In our Apple timeline, you can see how much the company changed and how a few pivotal moments have revolutionized the entire technological world.

How Did Apple Get Started?

What is the history of the Apple company? The company was founded in a garage by two college dropouts on April 1, 1976. Those two dropouts famously became known as “the Steves”; any brief history of Apple has to give a quick nod to Steve Wozniak and Steve Jobs, famous for their computer wizardry and marketing wizardry respectively. Steve Jobs, who since his death has been glorified in several films and documentaries, would leave the company but then return to help save it from foundering in the late 1990s. The Apple company history is in some respects the history of the entire computer industry: Apple played a key role in moving this technology into homes and consumers’ hands.

What Was Apple’s First Product?

What was the first Apple product? It was a computer, more specifically the 1976 Apple I, which had distinctly convenient computer terminal circuitry and usability. Jobs and Wozniak had to sell Jobs’s VW Microbus and Wozniak’s expensive calculator to pay for their new creation. 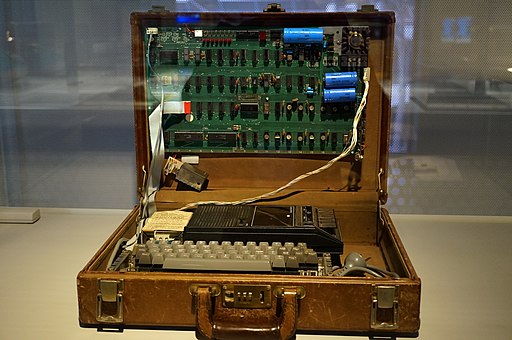 What was the second Apple product?

It was the Apple II, which changed the world of computing and is still one of the company’s most famous computers. It was able to display color graphics, which was exceptional at the time, and was considered to be one of the main three personal computers of 1977.

How Did the Evolution of Apple Computers Continue?

In our Apple computer timeline with pictures, you can see that the Apple II and its successors would keep the company going throughout the 1970s and early 1980s. Other important early Apple computers were the Macintosh 512K and the Macintosh SE. As you follow our Apple computer models timeline, you can see how quickly the company got out of hand, diversifying and expanding to dozens of models per year. This was changed when Jobs returned in 1997 and forced the company to look at its old Apple products and limit its scope a great deal. That’s around when the modern, sleek designs of the iMac and iBook were created.

What Was Apple’s First Phone?

While the Apple Newton and eMate 300 were the first PDA experiments, which would later resemble the earliest iPhones, Apple’s first official smartphone was actually the ROKR E1, which was released in 2005. This product was very limited but laid the groundwork for the first Apple iPhone; history focuses on that product and has somewhat forgotten the ROKR. June 29, 2007, was the first Apple iPhone release date. History, our timeline tells us, was made that day, as millions of iPhones and smartphone imitations have been sold since.

Here’s a timeline of the iPhone:

How Many Apple Products Have Been Sold?

The company has sold 2 billion iOS devices, which only truly counts the past few years. Count the Apple II and its ancient products and the total figure is likely millions more; the Apple II sold somewhere between 5 and 6 million units, for instance.

With our infographic, you can see at a glance how Apple has changed over the years, going from being consistently and primarily a computer company to consistently and primarily a device company, with newer inventions like the iPad and the Apple Watch keeping us on our toes. But in all cases, Apple has been a company focused on the consumer — maybe not what they say they want but what goes beyond their wildest expectations. Check out our video about the history of Apple to learn more.