We’ve got a huge industry, lots of real estate, and a massive amount of daily sales. Want fries with that?

Click the below image to view the full-size infographic 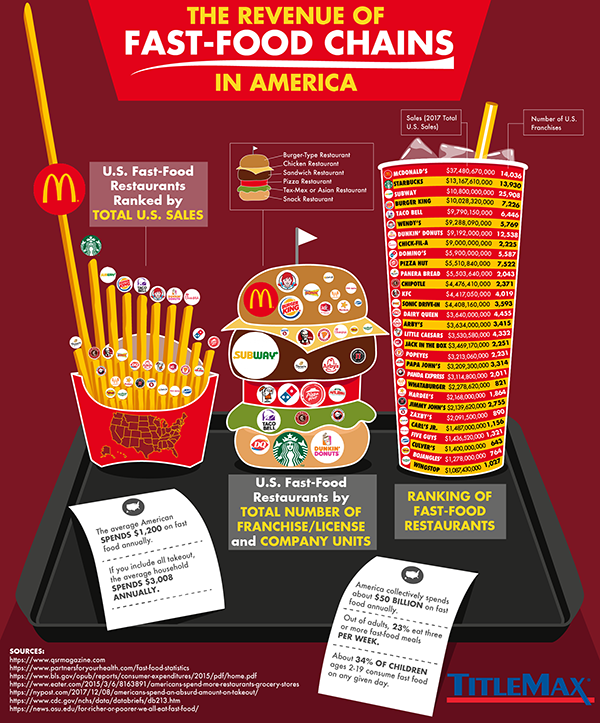 What Is the Most Popular Fast-Food Restaurant in the United States?

McDonald’s is by far the most popular restaurant in terms of fast-food sales. For the past five years, the Golden Arches has consistently recorded more than $35 billion in sales across all of its franchises. The parent company itself only makes $21 billion in overall revenue, so system-wide sales is an important metric to consider when looking at fast-food revenue statistics. The second-largest fast-food chain by sales is Seattle’s favorite coffee shop, Starbucks, but the parent company has made slightly more in reported revenue.

Which Fast Food Restaurants Make the Most Money?

If you look at fast-food restaurant rankings by sales, America has a few key contenders besides McDonald’s: Starbucks, Subway, and Burger King all make more than $10 billion in sales each year across their U.S. franchise systems.

The Top 10 Fast-Food Restaurants by Sales in America

These are the largest fast-food chains by revenue in the United States, including all system-wide sales (which includes franchise sales) as reported by QSR Magazine:

What Fast Food Franchise Has the Most Worldwide Locations?

If you want to answer the question, “What is the biggest fast-food chain in the world?” you may be surprised to find out that the answer is not McDonald’s but Subway. If you only take into consideration the number of locations, Subway has “Mickey D’s” slightly beat: The famous sandwich shop reports having 44,229 locations in 112 countries, while McDonald’s only has 36,900 in 119 countries.

How Much Does the Fast-Food Industry Make per Year in America?

Some estimate the fast-food industry’s revenue to be about $200 billion in America and $570 billion globally. Looking only at this list of the top 30, one can see that the revenue of fast-food restaurants is fairly high compared to other types of restaurants. Quick eats are taking a lot of dollars out of American pockets, with the average American spending as much as $1,200 every year on fast food and about a quarter of the population eating three or more fast food meals per week. These are some fairly sobering fast-food industry facts for Americans who may want to slim down their budgets and their waistlines.

Lifestyle
Discover what’s happening in the world in media, entertainment, daily news and trends and how they affect our daily lives and interests.Learn about a broad variety of topics that will inspire you and how you live, dress, shop, entertain, socialize and care for yourself each day.

Planes, Trains and Automobiles
Transportation has shaped our society across the broadest possible spectrum from both practical purposes, as a tool for survival, to aesthetics, as a personal expression and style and a millennium worth of history and science from the Orient Express offering transportation in 1883 to the Japanese Bullet train today that travels 200 MPH, vehicles are critical to our existance and at the same time sensationalized in film, as depicted in James Bond films and unusual video game vehicles. Few things we own have as much importance as the vehicles we own or dream to own one day .
Discovery Center