Traffic is horrible, but not for the reasons you think: Americans waste an estimated $160 billion on the road each year, an average of $960 per motorist. Traffic leads to both wasted money and wasted time, cutting into spending and other economic factors. Traffic also often leads to road rage, which causes half of all fatal crashes (loss of life having the worst long-term economic impact). Considering that we as Americans drive an average of 29.2 miles per day, it’s in our best interest to keep the roads clear. So which states have the worst traffic, and which states handle their extra traffic best?

What are the worst states for traffic in the U.S.?
Our graphic measures the mileage of the states’ public roadways and compares these figures to the total number of registered automobiles (as of 2014). Using that ratio as a metric, these are the most and least congested states, traffic-wise: 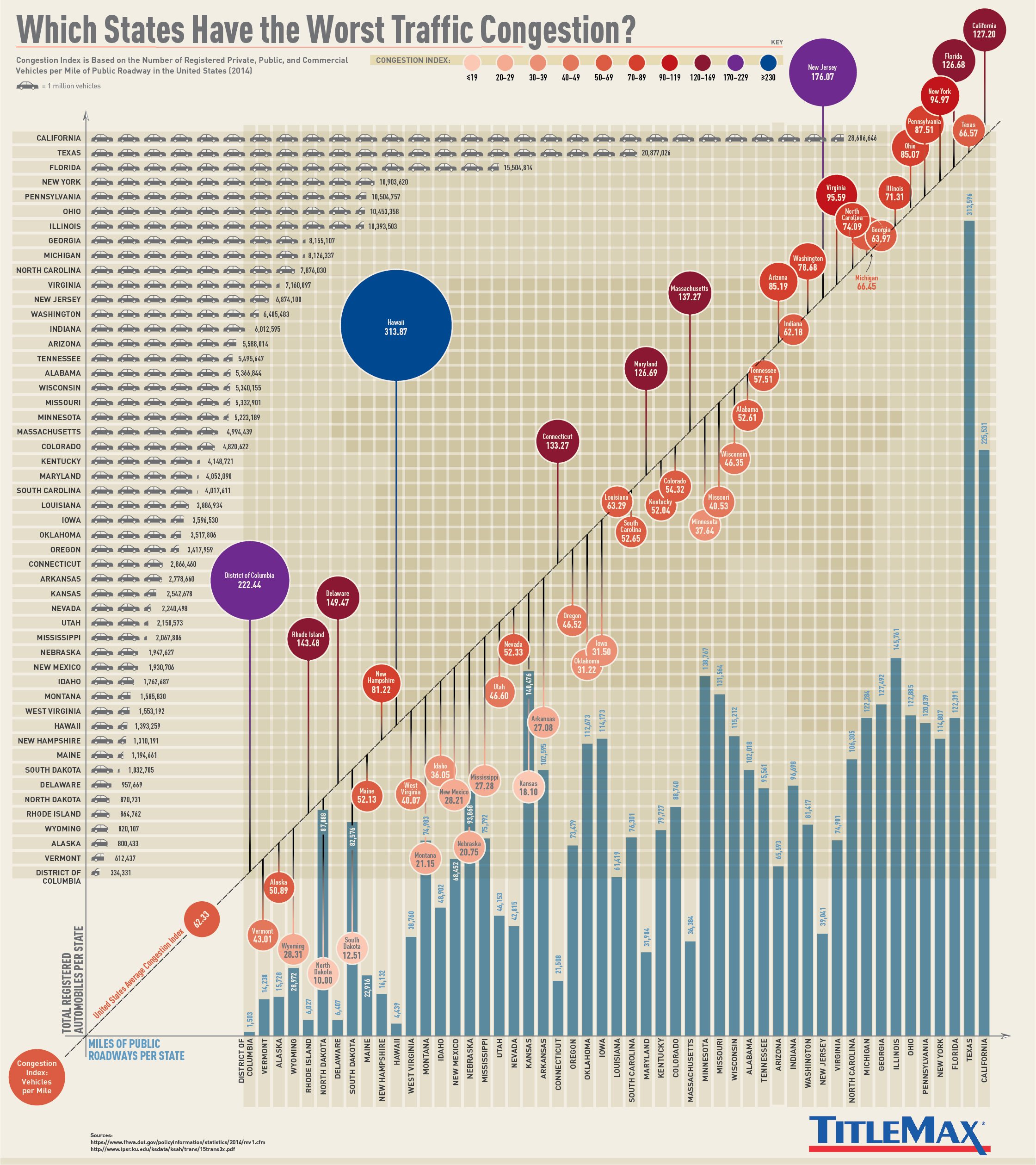 Would you like to add this Infographic to your page. Use this embed code:

How do states combat the congestion?
By and large, the two main ways to combat traffic in the United States are to either improve the design of the roadways or to reduce the demand for cars (usually through public transportation policy). Many metrics are gathered by state governments to provide data on how and where to make necessary changes. States invest millions into data-gathering or adaptive technologies to try to combat the problem. Utah has implemented adaptive traffic signals. Cities like New York City have made an effort to give bikers a place to ride by providing bike lanes and encourage non-car transportation (though there is a great deal that can still be done in that regard). States like Texas use special lanes to reward carpooling drivers.

The problem is that since many Americans are moving to cities or their suburbs, the problem of traffic is likely to keep getting worse.

Hopefully, in the next few years, autonomous driving will make this whole conversation unnecessary. Until then, good luck, Hawaiians!

The Ultimate Road Trip
Take time to get out of dodge. Can be a plane, train or automobile. This series focuses on good old road trips. Some are a couple miles down the road and some are across the country or across the ocean to the most fantastic scenery or landmarks you've ever seen. Included are how to prepare, fun on the road, and preparation along the way.

First Time Home Buyer
The journey into home ownership can be a great adventure, but one with many steps and months of challenges to pursue before achieving this great milestone. First time home buyers may find the home buying process to be complex and intimidating from finding the right-forever home, to understanding financing, to maneuvering through contracts before getting to the closing table... One way to minimize the fear of the home buying process is to gain knowledge and guidance. The objective of this series is to help first time home buyers understand the steps and gain a good level of knowledge and confidence within the home buying process. An informed buyer is a confident buyer.
Discovery Center